'When 900 years-old you reach, look as good you will not', so said a terminally ill Master Yoda. As we now know, he was of course discussing the merits of the venerable Quake III engine, which is being dusted off once more for Raven's second Star Wars outing, Jedi Knight: Jedi Academy. And despite the years, the old Qlll workhorse (now rivalling Jacko for number of facelifts) is still looking surprisingly capable. Indeed, having played the game extensively, we think it might be the best Jedi game yet.

Despite the lack of numerical evidence in the title, Jedi Academy is the chronological sequel to last year's Jedi Outcast, one of the most frustrating action games I've had the pleasure to review. And it was a pleasure, in spite of the formulaic running and gunning that had to be completed in the early stages, and the botched design of the game's more tedious puzzle solving sections.

The game eventually revealed itself to be probably the most enjoyable in the Star Wars lineage in terms of saber-wielding action, and it is with some relief, then, that the new game focuses even more strongly on the electrifying clash of saber on saber.

As mentioned last issue, some other major changes are obvious even before the adventure begins. Kyle Katarn, hero of the previous Dark Forces!Jedi Knight adventures is no longer heading the cast list, having been forced to take a wage cut and pass on his dubious talents as a teacher at Luke Skywalker's School of Jedism on Yavin 4. Instead, you play the game as his student, a young Padawan of undetermined heritage eager to learn the ways of the Force.

But before the first lesson begins, wannabe Jedi must first create their character, selecting from one of five races, (human, Rodian, Twi'lek, Zabrak and Kel Dor) and completing the look with a range of ready-made heads, torsos and legs.

Next comes the selection of the ultimate accessory, with the option to choose a blade colour and hilt design for your saber - a feature that has had a few obsessive Wars devotees frothing in their trousers. Seeing as the thing will be in your hands most of the time, it baffles me why anyone should care, but then what do I know - I only watch the films.

One aspect that is worth getting heated over is the new combat styles. Previous Jedi outings have concentrated solely on the traditional fighting methods favoured by Vader and son, but now you can choose to specialise as a dual saberwielding berserker, or ape the moves of the acrobatic Sith lord Darth Maul with his two gaffer-taped-together sabers. Follow the traditionalists and go for the single saber option and you can effect the full range of Force powers with relative ease, even in the thick of battle. Opt to specialise with dual sabers, however, and while you can go hammer and tongs like some demented majorette, Force powers will be harder to pull off.The Darth Maul style of combat is the more flamboyant of the three and allows for some impressive gymnastics and plenty of high kicks to knock the enemy off balance and, as before, the higher your Force level, the more special moves and attack combos you can pull off.

The control system itself is still being worked on, but it's clear Raven will be honing the Jedi Outcast system rather than making drastic changes, which is great news since the existing system was both simple and powerful enough to allow for some deft moves. The game now feels even closer to a beat 'em up, yet even with the keyboard/mouse combination it feels as intuitive as playing Street Fighter on an original arcade cab.

While Outcast's levels were generally Puzzle-based and largely frustrating due to their sprawling size and poor signposting, Academy's are focused, action-based affairs, with key-searching and button-pressing kept to a minimum. Battles are frequent and exciting, usually pitting you against multiple opponents, though you sometimes have the support of one or two Al teammates.

One particularly satisfying level sees you fighting alongside Chewbacca (although I accidentally singed his fur with my lightsaber and he chased me to death for doing so) and we can expect to see quite a few other old faces turning up to lend a hand as well, including Luke Skywalker and his little sister.

Scurrilous rumour has it that Ewoks are set to make an appearance, which is fine, so long as we get to poke their beady little eyes out in the multiplayer game.Although we like to whinge when developers use yesterday's technology for their games, it may be a very fortunate decision for us that Raven has decided to go with id Software's aging 3D code, past-masters that they are at turning successive id engines into high quality action games. For one thing it means the wait has been a short one, just over a year in fact - which when you consider we've already been forced to wait over six years for the Duke Nukem sequel - is quite an impressive turnaround.

For another, Quake Ill's aging architecture can still cut the mustard, as Elite Force II - another Raven production - has proved. Add in all the various enhancements Raven has made through the years: Ghoull II animation, ICARUS scripting, a new terrain engine, ragdoll physics and even vehicles - and it's clear that until Doom 3's code goes out, Quake Ill's will do very nicely.

Not Even A Jedi Wants To Have To Leg It Everywhere...

Jedi Academy features a new emphasis on drivable vehicles, with Tauntauns and AT-ST Scout Walkers to command. Unfortunately, only the stinky two-legged arctic camels were available to try out in our beta build. Hopping aboard is simply a case of pressing the action key when you get near one (or you could be a show-off and Force Jump onto their backs) and since no special keys are required, controlling them is simple - just rotate left and right and press forward when required. 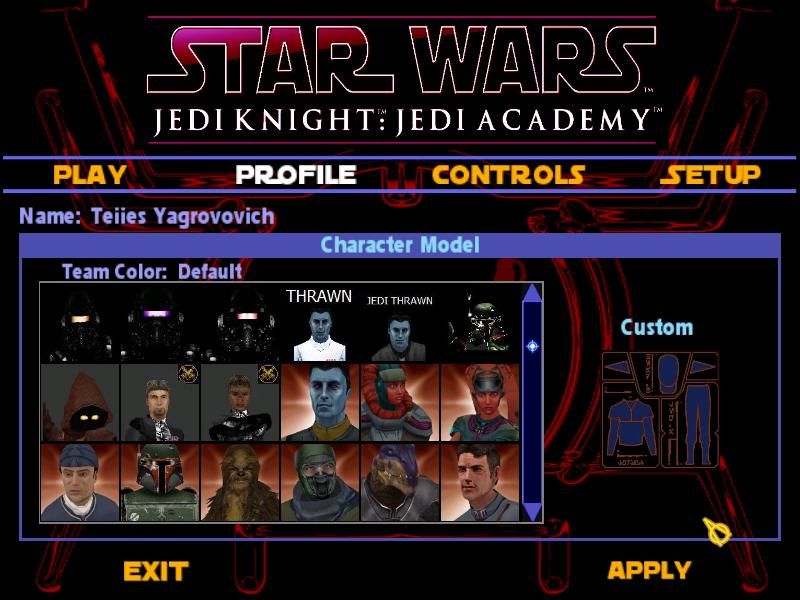 They are hardly the most exciting beasts to control and the novelty of padding across the frozen wastes will, we fear, soon wear off. But they have a useful purpose in traversing maps quickly and they gurgle quite convincingly. You can't fight while mounted at this stage, but we're assured you will be able to once the game is complete. Instead, we tried out the Tauntaun's charge attack and bowled our way through an entire squad of Stormtroopers - which undoubtedly will be a most enjoyable way to rack up frags in the online game.

This patch is completely compatible with old single player save game files. All Multiplayer users must use Jedi Academy version 1.01.

If you are experiencing low framerate, go into the Setup/More Video section and change dynamic glow to off.

Gravis gamepad users should turn force feedback to off. The current Gravis drivers are not compatible with Jedi Academy and will cause the game to crash.

If you experience hiccupping while playing, especially during light-saber battles, go into the Control, Mouse/Joystick section and set force feedback to 'No'.