Shove a copy of Conflict: Desert Storm into the line of sight of most games journalists and they'll invariably blow air into their cheeks and make a noise like Meh'. Lovingly display it in the window of your local games emporium, however, and just watch the kids go wild: they bay, they howl, they paw at the windows - all desperate to propel Conflict's brand of streamlined squad-shootery up to the top of the charts. The kids' don't know everything (just look at Dairylea Lunchables), but they know what they like, and to sate their addiction the Conflict boys are about to provide another famous outing of US foreign diplomacy for their delectation. So let's all say a big hello to Conflict: Vietnam.

In an extensive play of some early code, we became thoroughly embroiled in the game's tale of four Vietnam stereotypes trapped behind enemy lines: the green rookie, the had-enough-of-this-shit veteran, the hick and the black guy, fighting their way through the undergrowth in the knowledge that the raging Tet offensive has cut off the chances of any airlift rescue. Aimed to land somewhere between the painstaking command structure of games like Rainbow Six and the stand by that burning car and pull the trigger' approach of EA's fun-packed Freedom Fighters, this Conflict epistle allows you to switch between the roles of heavy gunner, sniper, light gunner and medic while issuing all manner of snipe that chap', heal that soldier', blow up that gun emplacement' orders. The command system itself has been pretty streamlined since Conflict's Iraqi efforts and there's a lot less keyboard tapping. A mere depression of the right mouse button, a selection of a squad member and a look in the right direction will do the majority of your dirty work. The game is now more attuned to realise that you're unlikely to send Cherry the medic to heal a grumpy Vietcong sniper, and so saves you some fiddly tapping by automatically knowing that you want to deliver bloody death - so bloody death comes a lot more swiftly. 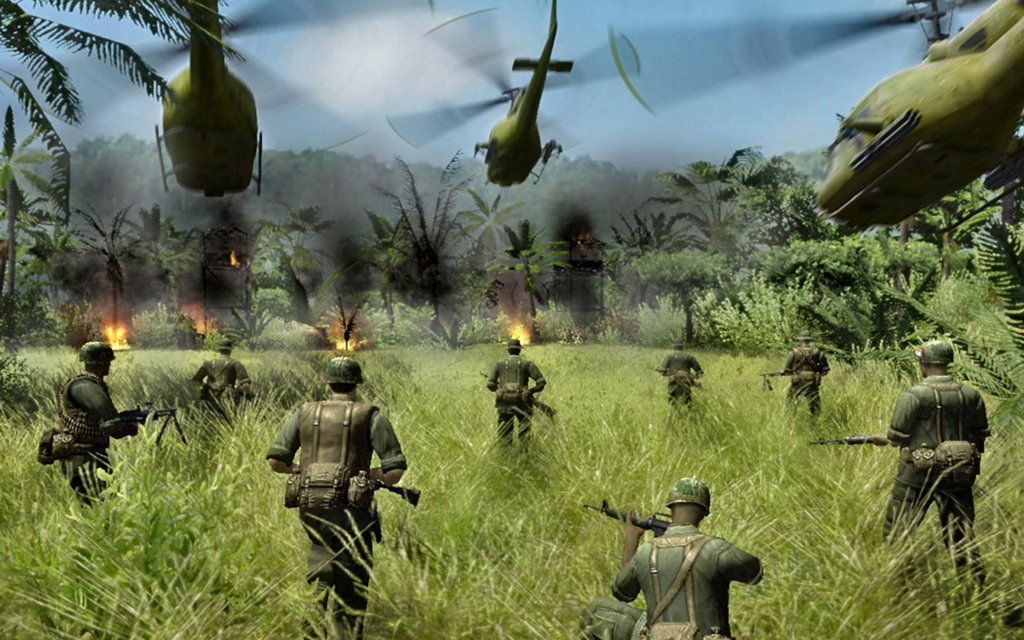 The biggest challenge for Pivotal must have been using a retooled Conflict engine and jamming the Deserf Storm experience (where there's a lot of sand and no trees) into Vietnam (where there are a lot of trees and no sand). The results are fairly satisfactory, although it's true to say that there's nothing on offer here that gets even close to the jungles we've seen in Far Cry or even Battlefield: Vietnam - we should perhaps bear in mind that this is a simultaneous console release so the visuals were never likely to set your graphics card alight. Explosions are satisfyingly meaty though, never straying too far towards Hollywood extravagance, and the impression of dense jungle is certainly conveyed - even if the game doesn't allow you to run around willy-nilly as other jungle shooters do. There's occasionally more than one path to follow (a hidden track path or a creek that you can wade through might be discovered and provide a parallel route towards the level's main focus), but otherwise action proceeds in a pretty linear fashion. You'll be venturing along jungle trails, through ramshackle villages, among the ruins of ancient temples and down into VC tunnels and trenches - with your escapades being punctuated by some excellently designed set pieces.

My dalliance with the preview code started off with a lot of huffing and puffing on my part (perhaps because I felt that Conflict's spiritual home was located a lot closer to my living room floor than my office-bound gaming powerhouse) but some of the situations that the game threw at me really started to reel me in. A seemingly obedient village, for example, luring you in before suddenly sprouting snipers and rampaging militia intent on gunning you down.My favourite moment, however, came with the start of the Tet offensive; the point at which the facility you've been pottering about in and doing your training is suddenly invaded by hordes of North Vietnamese trouble-makers. Fighting your way back to the giant, circular, high ground at the centre of the US military compound is all great scripted fun, with VC leaping into your trenches left right and centre and providing some neat surprises.

The climax comes with the defence of the central, circular compound - marking the VC entrypoints with red smoke grenades and watching helicopters swoop in and torch the flood of enemies.

Matters are made slightly more frenetic meanwhile, with the appearance of an enemy tank - and with three of my men grounded by bullet wounds it was a truly tense moment that saw my medic bombarded by bullets and shells, crawling across exposed ground to revive a stricken Hoss who I had equipped with a rocket-launcher and was therefore my only hope in incapacitating the roving tank. I succeeded, but was later summarily brought back down to earth when I mistimed my red smoke-marking of the final enemy incursion point, highlighting instead the surviving US troops and watching them hurled far into the air by their own air support.

Pivotal clearly wants you to develop a stronger attachment to your allocated foot soldiers than in its previous efforts, so as well as the story and the in-squad bickering there's an RPG-lite feature that crops up between missions. Here you can tinker with your troops' abilities, so if you want to turn your medic into a gung-ho, cigar-chomping machine-gunner then you can - as long as he's racked up enough points on his travels through the wilderness.

Another thing to keep your eye on is ammunition - you're trapped behind enemy lines so your army-issue bullets increase in value the further you go into a game, and you often have to abandon them altogether and fight instead with pilfered North Vietnamese weaponry. I've lost count of the times while playing the preview code that I've gathered my men together before a major confrontation and discovered that all they have to offer in the way of firepower is two rifle rounds, a few pistol bullets, a knife and a paperclip. Ammo conservation and distribution is something that has to be addressed on even the easiest of modes,and those who foolishly leave their grunts with full permission to blast away at anything even mildly threatening will start to rue their wasteful habits.

But this isn't just any conflict - this is Nam. The poster-boy skirmish for grit, grunts and guerrilla nastiness; so how does Conflict: Vietnam slot itself into the Saigon vibe? Well first off there are the obvious routes - such as having a level based on an Apocalypse Now-style patrol boat, staging the game's opening chapters in the aforementioned military base and ramming a mix of profanity and Nam jargon into your squad's filthy chitchat. Look a bit closer, however, and you'll realise there's also some genuine ingenuity going on here. For a start there's the traps - if you're sauntering through the undergrowth and sparing little attention to the well-being of your squad, then a hidden wire or mine will ignite your point-man before a comrade has got beyond screaming the Boo!' syllable of Booby trap!'. Elsewhere, when searching for a downed helicopter and extremely low on ammo, I was absolutely delighted to come across a neat pile of grenades and rifles in a quiet jungle clearing - but markedly less delighted when I rushed over to grab them and was met only by the unexpected detonation of the explosives hidden underneath them by a clever VC. Another neat touch, meanwhile, is when you blow away an enemy and wander over to inspect the damage you've caused, only for Charlie's last dying act being to roll over and reveal a freshly primed grenade sitting at your feet -provoking all manner of swearing and frantic order-giving.

Conflict: Vietnam certainly seems to be capitalising on the gameplay opportunities presented by the grubby chaos of Nam - whether you're running away from a friendly napalm strike or trying to lock a shot onto a hidden sniper. The victor of the battle of the Vietnam shooters is still far from revealed, but we're warming to Conflict: Vietnam (maybe it's the cute Vietnamese goats that have swayed us) but our expectations have certainly been raised.